Effectiveness of low-frequency and intensity electromagnetic fields on gastrointestinal disorders

Although pharmacology has made considerable progress in the treatments of various diseases, we should also recognize that in numerous cases pharmacology treatments are ineffective. In these cases, the application of biophysical low-frequency and intensity electromagnetic fields /treatments (LFI-EMFs) can offer new opportunity.

In the early 1980s, diarrhoeal disorders were the biggest child killers, responsible for about 4·6 million deaths worldwide every year. Despite widespread use of various therapies and an increased understanding of the pathogenesis of diarrhoea, 2·5 million children still die from these illnesses every year, almost all of them in developing countries. (Nikhil Thapar and Ian R Sanderson. Lancet, 2004, 363). Persistent diarrhoea is related to undernutrition, growth faltering, micronutrient deficiency, impeded neurodevelopment, increased morbidity and mortality in childhood, among others (Moore et al., 2010; Black et al., 2008; McAuliffe et al., 1986).

In addition, chronic constipation is one of the most common gastrointestinal problems in children. Constipation is such a common problem in the pediatric population that it is the second most referred problem to the pediatric gastroenterologist and accounts for 25% of all office visits. It accounts for 3% of visit to general pediatrics clinics and 30% of visits to pediatric gastroenterologist. Causes of functional constipation include, for example, dehydration, inflammatory bowel disease, psychosocial stress, parental disharmony, etc.

Despite your efforts, to date there is no really effective cure for gastrointestinal disorders. However, in addition to the modern pharmacologic and psychological methods, LFI-EMF treatments and developments should get more possibility and attention in the application of biophysical treatment of diseases in the future, because during diverse diseases, cells and living systems not only display altered biochemical processes but also produce altered bioelectric and bioelectromagnetic complex patterns.

According to our six years of experience, we have successfully treated hundreds of children with chronic gastrointestinal problems, whom drugs and other types of treatments have been ineffective by low-frequency and intensity electromagnetic fields of our so called EMOST (Electro-Magnetic-Own-Signal-Treatment) medical device. All together, it is very probable that EMOST method exerts its effect through the skin associated autonomous nervous system, which offers a unique therapy for the treatment of neurological disorders. The particular effectiveness of EMOST method is possible due to the analogous process of own non-linear signals detected from skin that makes it possible that the biophysical information content of detected and back-transmitted electromagnetic signal is much larger than in digitized methods. In addition, the application of patient’s own signals also makes it possible that all treatment can be individualized.

Treatment of children with (chronic) diseases is very important because it serves the prevention and reduces cost. However, the effectiveness of EMOST treatments for children is much stronger than in adult subjects. According to our several year’s experiences by EMOST, in children, much less treatment is needed for recovery treatments as opposed to adult subjects, as well as the duration of treatment is shorter. It is possible that this special effectiveness of EMOST treatments is due to the large plasticity of the central and the autonomic nervous system in young patients. Thus, our research pays special attention to study EMOST effectiveness in the field of (chronic) childhood diseases. 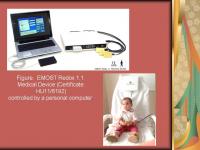 I believe that such medical equipment would be necessary for all Children`s Clinic, which in many cases is more effective than the drugs and can reduce costs.